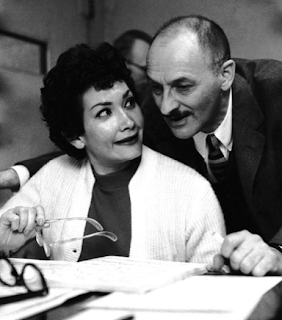 The American Prize is honored to announce that the extraordinary American soprano, Brenda Lewis, (shown above with composer Marc Blitzstein, photo courtesy Sony Music Entertainment) is our first Distinguished Judge Emeritus. Miss Lewis's career, jaw-dropping in its variety and accomplishment, has included outstanding successes in opera and light opera (at the Met, New York City Opera, on tour, and in world premieres of operas by Marc Blitzstein and Jack Beeson) on Broadway and television, and as stage director and educator.

“I have had the privilege (and the fun) of knowing Brenda Lewis for more than three decades,” commented David Katz, chief judge of The American Prize, “starting as her assistant conductor for performances of Benjamin Britten’s Albert Herring at the Hartt School in 1980s.

"When I moved the original Friedrich Schorr Prize from Michigan to Connecticut in 2000, it was Brenda (and her dear friend and fellow artist Adelaide Bishop) who I turned to to head up the judging panel.

"I am delighted that Brenda Lewis has agreed to offer her name and expertise to the Schorr competition’s reincarnation as The American Prize in Vocal Performance—Friedrich and Virginia Schorr Memorial Awards. We are deeply honored by her attention and interest.” 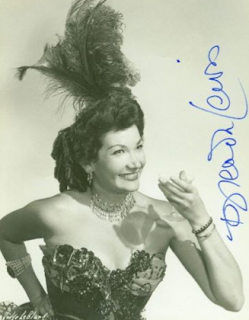 (Photo of Brenda Lewis as Rosalinde in Die Fledermaus.)


The following biography of Miss Lewis is excerpted from a longer version written by Lucy Cross of MasterworksBroadway.com, where the full version may be found.

Brenda Lewis grew up in Sunbury, PA. After attending the Curtis Institute, she auditioned for the Philadelphia Opera Company and at the age of nineteen made her operatic debut with the Company in the role of the Marschallin(!) in Richard Strauss’s Der Rosenkavalier.

Miss Lewis’s first Broadway appearance was in The Merry Widow (1944), with the famous Polish tenor Jan Kiepura. After World War II, Brenda Lewis supplemented performances at the City Center Opera (The Bartered Bride, Faust, and The Gypsy Baron, Britten’s The Rape of Lucretia), with gigs as a nightclub blues singer and standup comic.

Brenda Lewis attributes her early success to the fact that she could absorb music and words (in any language) almost on the spot: to learn the role of Marie in Wozzeck at the NY City Center Opera she took only three days, and once in 1945, when a scheduled soprano became indisposed, she learned Marguerite in Faust in twenty-four hours.

By 1949 Brenda Lewis was the Carmen, the Salome, and the Santuzza of choice at the City Opera. One night after a performance of Salome, Marc Blitzstein and Leonard Bernstein came backstage to congratulate her, and Blitzstein mentioned in the course of the conversation that although the title role of Regina in his new opera (based on Lillian Hellman’s play The Little Foxes) was being written for a mezzo-soprano, the soprano role of Birdie was still open. “I felt that it was fated to be mine,” said Lewis later...Regina came to the 46th Street Theatre in New York on October 31, 1949, and played to excited and uplifted audiences for 56 performances.

Brenda Lewis made her debut with the Metropolitan Opera Company in 1952 in the role of Musetta in La Bohème, and followed it very shortly thereafter with Rosalinde in Die Fledermaus.

Over the next ten years Lewis appeared at the Met as Rosalinde, as Donna Elvira in Don Giovanni, Venus in Tannhäuser, Marie in Wozzeck, Marina in Boris Godunov, and as Carmen, Salome, and Vanessa. Yet she did not abandon Broadway – for a three-month run in 1954 she performed with French ballet star Zizi Jeanmaire in The Girl in Pink Tights. She continued to sing with City Opera as well, taking on the central role of Regina in revivals of the Blitzstein opera, when the production was recorded for Columbia.

Lewis traveled extensively in the 1950s: she toured with the Metropolitan Opera to leading American cities coast to coast and had comparable successes in her signature roles with regional opera companies in Pittsburgh, Central City, New Orleans, Boston, Montreal, Seattle, San Antonio, Houston, Dallas, and Chicago. Nor was she confined to the shores of North America: she went to Rio de Janeiro to sing Venus, Musetta, Santuzza, Marguerite, Marina, and Donna Elvira, and to Cuba to sing Santuzza.

In 1956 she was engaged at the Volksoper in Vienna, Austria, to star in the first gala full-scale European production of Cole Porter’s Kiss Me, Kate. It was such a sensational success that she was asked to return the following season in Annie Get Your Gun, in the Ethel Merman role. She was subsequently invited to sing both these roles at the Zurich Opera in Switzerland, as well as Carmen and Salome.

In 1963 Lewis began a new career as producer and stage director for the New Haven Opera Company in Connecticut. She had not stopped performing, however. In 1965 Jack Beeson’s Lizzie Borden, with Lewis in the title role, had its world premiere at the New York City Opera; it was filmed by WGBH in Boston and broadcast nationally.