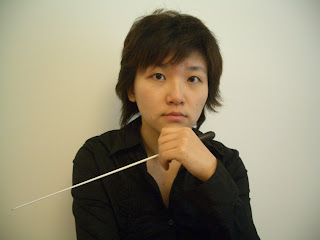 The American Prize is pleased to announce that Tong Chen has won a special Career Incentive award in Conducting. The judges commented about Maestro Chen's performance "the conductor showed an extraordinary command of the orchestra which followed superbly."

Tong Chen, a native of Shanghai, China, has worked as an assistant conductor at the Shanghai Opera House since 2004 and is now working as the assistant and fellowship conductor under the tutelage of Gustav Meier and Markand Thakar at The Peabody Institute. Ms. Chen has been an assistant conductor at the Central City Opera House, has worked at the Carbillo Festival with Marin Alsop and was a conducting fellow at the American Academy of Conducting at the Aspen Institute.

The American Prize will today announce a series of "Excellence in Music Education" citations to conductors who displayed special skills in this area based on submitted applications.

Following the announcement of citations and winners, we will begin the process of sending prizes, certificates and evaluations. More on this procedure shortly.

If you have any questions about these or future The American Prize competitions, or wish to be considered as a judge, please email us at theamericanprize@gmail.com or theamericanprz@aol.com. Many thanks.
Posted by david at 10:17 AM