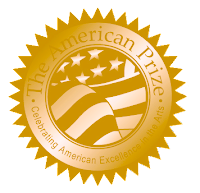 The American Prize, the national nonprofit competitions in the performing arts, is pleased to announce its 2013 series of contests for individual artists and performing ensembles. Complete information, including application forms and profiles of former winners, may be found on the website: www.theamericanprize.org

CLASSICAL VOCALISTS in OPERA and ART SONG
PIANISTS performing as SOLOISTS or in CONCERTO
COMPOSERS of choral, orchestral or band works, or chamber music

Contests for Conductors and Ensembles:

The American Prize is a series of new, non-profit national competitions in the performing arts unique in scope and structure, providing cash awards, professional adjudication and regional, national and international recognition. Each year, The American Prize rewards the best recorded performances by individual artists and ensembles in the United States at the professional, community, college and university, church and school levels. In addition to monetary rewards and written evaluations from judges, winners are profiled on The American Prize websites, where links will soon lead to video and audio excerpts of winning performances. The American Prize has awarded more than $10,000 in cash prizes in all categories since 2010.

David Katz is the chief judge of The American Prize. Professional conductor, award-winning composer, playwright, actor and arts advocate, he is author of MUSE of FIRE, the acclaimed one-man play about the art of conducting. Joining Katz in selecting winners of The American Prize is a panel of judges as varied in background and experience as we hope the winners of The American Prize will be. Made up of distinguished musicians representing virtually every region of the country, the group includes professional vocalists, conductors, composers and pianists, tenured professors and noteworthy orchestra and choral musicians.

“Most artists may never win a Grammy award, or a Pulitzer, or a Tony, or perhaps even be nominated,” Katz said, “but that does not mean that they are not worthy of recognition and reward. Quality in the arts is not limited to the coasts, or to the familiar names, or only to graduates of the most famous schools. It is on view all over the United States, if you take the time to look for it. The American Prize exists to encourage and herald that excellence.”

The American Prize is administered by Hat City Music Theater, Inc., a 501(c)3 non-profit performing arts organization based in Danbury, Connecticut.
Posted by david at 9:55 AM No comments: