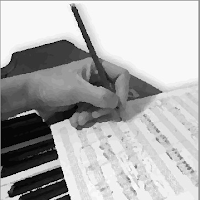 The American Prize winner:
Michael Deak   (Gig Harbor, WA)—INTROSPECTIONS, for two guitars
Michael Deak was born in Los Angeles 10/10/1942. His father was a concert pianist who studied with Franz Liszt's students and Bela Bartok. Imre died in 1945, a month after his friend, Bartok, thus depriving Michael of his father's great experience. Michael grew up in Pasadena, but didn't pursue music until he was 19. He studied with Morten Lauridsen and Ellis Kohs at USC. Michael has won two competitions, was a finalist in a Greek competition this past March, and has been recorded twice. Michael has had a broadcast of his piano music on KUSC-FM in L.A., and he has been published. Michael and his wife, Barbara, now live in Gig Harbor, Washington.

Among judges' comments: "an extremely attractive and skillfully written work with an impressionist flavor that shows range and variety, imagination, an individual voice..."

American composer Nancy Bloomer Deussen is well known as a  composer, performer and arts impressario. She is a leader in the growing  movement for more melodic, tonally oriented contemporary music and is  co-founder and President Emeritus of the SF Bay Chapter of the National  Association of Composers, USA.  Her original works have been performed in  the USA, Canada, Europe, Australia, China and Indonesia and she has received numerous  commissions both locally and nationally. Ms Bloomer Deussen holds BM and MM degrees from The Manhattan  School of Music and a BM in Music Ed from the USC School of Music and her teachers of composition were Vittorio Giannini, Lukas Foss, Ingolf Dahl and Wilson Coker. Recent performances of her works include: "A Field in Pennsylvania" by The Dayton Philharmonic Symphony, "Solstice Circle" at the American Harp  Society concert in San Francisco, "Carmel by-the Sea" by the US Army  Symphony Orchestra, "Ascent to Victory" by Orchestra Nova of San Diego, "Music From the Heartland", "Adirondak Morn" and "Two American Songs" at the American Pen Women conference in Washington, DC, "San Andreas  Suite" by the Divisa Ensemble, and numerous others. www.nancybloomerdeussen.com

Among judges' comments: "lovely...the finale is a fast and energetic movement with distinctive themes..."

Composer and conductor David P. Sartor is Adjunct Professor of Composition at Trevecca Nazarene University.  He has received the prestigious Ostwald Award from the American Bandmasters Association, the National Fine Arts Award, and more than two dozen awards from New Music for Young Ensembles, Meet The Composer, Delta Omicron and ASCAP, among others.  Sartor is a popular guest composer, conductor and lecturer whose engagements include the Washington National Cathedral, Illinois State University, Middle Tennessee State University, the Nexus Chamber Orchestra and California State University, sponsored by New York City’s Meet The Composer Foundation. In 2009, Sartor was inducted as a National Patron of Delta Omicron International Music Fraternity in recognition of his accomplishments as a composer and conductor.  His works are recorded on the ERM label, are published by E.C. Schirmer, Shawnee Press, and Metamorphic Music, and are distributed worldwide by J. W Pepper. Web site: http://davidsartor.com

Among judges' comments: "...skill and motivic rigor in its thematic treatment, with idiomatic parts, varied textures, and gleaming brass sonorities...

Among judges' comments: "It is this type of mental and musical creativity which is accessible to audiences of all makes and models...beautifully presented..."

Rodrigo Bussad received his Bachelors at the State University of Campinas (UNICAMP) in Sao Paulo and a certificate as Audio Technician by the Institute of Audio and Video of Sao Paulo. It is currently enrolled for his masters degree at the University of Miami where also works as a TA for Aural Skills class. In 2008 he studied at the Unicamp Winter Festival with Claude Ledoux from the Paris Conservatory of Music. In 2009 he recorded the album TUWA, for instrumental quartet, featuring his music exclusively, financed by the Campinas City Hall Department of Culture. His pieces have been performed in Brazil, the USA and countries in Europe. He participated twice in the SoundSCAPE Festival of New Music in Maccagno, Italy (2011-2012) and had premieres in both of them. He also worked at the 2012 festival as the recording and sound engineer. His piece Ignis Fatuus, for clarinet solo, was released in the album Refractions, recorded by the clarinetist Gleb Kanasevish. Bodisatva, for percussion ensemble, was chosen to be part of the “Emerging Composers Concert” during the Miami Festival of Music in 2012. His worked is heavily inspired by far Eastern philosophy and musical idiom. Currently researching the Chinese oracle, the Yi Jing, and using as what he has learned as a resource for his compositional process, Bussad also studies traditional Chinese music and is one of the founding members and director of the Gaoshan Liushui ensemble, the first traditional Chinese music ensemble in South America.

Among judges' comments: "A composition based on extended techniques for all three performers, this piece is able to take the listener on a journey that frightens and disturbs..."

Raised in Hong Kong, the music of Chin Ting Chan (b. 1986) has gained recognitions from the Interdisciplinary Festival for Music and Sound Art in Vienna, Soli fan tutti Composition Prize, newEar contemporary chamber ensemble, Mid-American Center for Contemporary Music, and performances throughout the United States, Canada, Austria and Germany. He received degrees from San José State University (B.M.) and Bowling Green State University (M.M.), and is currently pursuing a D.M.A. in composition at the University of Missouri–Kansas City. He has studied with Chen Yi, Zhou Long, James Mobberley, Paul Rudy, Marilyn Shrude, Burton Beerman, Andrea Reinkemeyer, Brian Belet and Pablo Furman. Over the first half of 2013, he has been developing electroacoustic music for IRCAM, using Cycling 74’s Max 6 program, with instructions from Grégoire Lorieux. Mr. Chan is a founding member of the composer’s consortium Melos Music. www.chintingchan.com

Among judges' comments: "Chin is able to use these three players in multi-facted ways - mostly playing with extended techniques for all the performers, but with desired effects."

Congratuations to winners and runners-up.