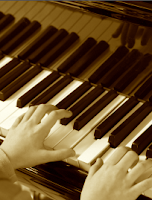 The American Prize winner:
KASANDRA KEELING   San Antonio  TX
(Rachmaninoff—Rhapsody on a Theme of Paganini)
Dr. Kasandra Keeling is currently Associate Professor and Chair of Keyboard Studies at the University of Texas at San Antonio.  As a soloist, collaborative artist, and teacher, she has traveled throughout the US, Mexico, Canada, and China.  In 2007, she was invited to be a visiting professor at the Central Conservatory of Music in Beijing, China, as well as at Nanjing Normal University in Nanjing.  She has performed at Steinway Hall in NYC, at the Royal Conservatory in Toronto, Canada, and at the Teatro de Jalisco in Guadalajara, Mexico, as well as numerous universities, festivals, conferences, and private venues across the US.   In 2008, Dr. Keeling was awarded the Outstanding Collegiate Teaching Achievement Award by the Texas Music Teachers Association.   She received degrees in performance from the University of Houston and the University of Colorado at Boulder and her primary teachers were Janice Hodges, Nancy Weems, Alvin Chow, and Larry Graham.

Among judges' comments: "The performance was seasoned and artistic..."

17 year old William Hume is a senior at Carlisle High School in Carlisle, Pennsylvania, and has studied piano for over ten years.  He has won various awards and competitions and has performed at the Kennedy Center, Weill Recital Hall, and on the National Public Radio Program “From the Top.” He was recently named a 2014 National YoungArts Foundation Winner.  William has performed as a soloist with several orchestras, playing concerti by Mozart, Bach, Grieg and Beethoven.  His other interests include basketball, running and writing, and he has earned a varsity letter in Cross Country and a Gold Key Award in the Scholastic Art and Writing Contest.  He is a member of the National Honor Society and volunteers as pianist at area nursing homes and the Salvation Army.  He is a student of Dr. Jennifer Blyth.      http://williamhume.com/

3rd Place
HYUNKI YOON   Kansas City  MO
Prokofiev First Concerto
Hyunki Yoon, pianist, is a native of Seoul, Republic of Korea.  He completed a Bachelor of Music degree in piano performance as a scholarship recipient at Chugye University for the Arts in Seoul.  Winner of the 1999 Eumyun Piano Competition and the 1998 Music Education Newspaper Competition, he has participated in concerts as soloist, chamber musician, and accompanist in Germany, Korea, and the United States.  He completed a Master of Music degree in piano performance as a full scholarship recipient at University of Missouri-Columbia.  As a graduate teaching assistant there he accompanied Show-Me Opera productions and taught applied piano class.  He performed the Prokofiev Piano Concerto No. 1 with the MU Philharmonic Orchestra at the Missouri Theatre in 2011 and received Runner-up in the Missouri Music Teachers Association's (MMTA) Collegiate Honors Auditions in 2011 and 2012. In 2013 he was featured an Emerging Artist Competition winner at the Missouri Theatre.

He is currently pursuing a Doctor or Musical Arts in piano performance at the University of Missouri-Kansas City, where he studies with Dr. Robert Weirich and receives full support for his entire doctoral program.

Congratulations to all!
Posted by david at 2:00 PM