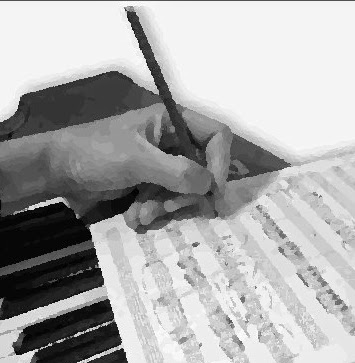 The American Prize winner:
KYLE RANDALL selected works
San Francisco CA
Kyle Randall is an internationally-performed composer, with premieres across the world from Carnegie Hall to La Schola Cantorum in Paris and Harvard's Memorial Hall, and he has received commissions from renowned groups such as the Harvard Glee Club and the Juventas New Music Ensemble. In his music, Kyle strives for vividness and sincerity, and he enjoys writing in a wide variety of styles. Listeners have commented on his directness and clarity of expression, and appreciate his willingness to draw on the past as well as the present in his writing. Born and raised in New Hampshire, Kyle received a B.A. from Harvard, where he studied composition with Chaya Czernowin, Hans Tutschku, Richard Beaudoin, and Trevor Baca, and he is currently pursuing a Master's in composition from San Francisco Conservatory, studying with David Garner. In his spare time, he likes to read, cook, hike, and ski. www.kylerandall.com


2nd Place:
KEITH ALLEGRETTI "Three Nocturnes"
Santa Fe NM
A native of Santa Fe, New Mexico, Keith Allegretti is a composer and pianist who enjoys working comfortably in many genres, including chamber, orchestral, vocal, and electronic music, and even musical theater. His music has been performed in Santa Fe, Houston, Berlin, Ann Arbor, New York and elsewhere by professional and amateur ensembles, including Santa Fe New Music, Quartetto Indaco, the Rice University Chorale, the University of Michigan Symphony Orchestra, Circuit Bridges, the Santa Fe Community Orchestra, and the American Creators Ensemble. He holds degrees in composition from Rice University and the University of Michigan. For more information, please visit www.keithallegretti.com.

Julia’s pieces have been played by the ensembles including the Esterhazy String Quartet, Kalistos Chamber Orchestra, Trio d’Esprit, and members of the LA Philharmonic. She has presented work in master classes with John Corigliano, Robert Carl, Craig Hella Johnson, and others. In 2011, she attended Yale’s New Music Workshop as a composition fellow to study with Martin Bresnick. Julia has had works commissioned by groups such as the Tenuto Chamber Singers, WomenSing, and the University of Chicago's Camerata. To learn more about Julia, please visit her website at www.juliaseeholzer.com.


HONORABLE MENTION:
ANDREY STOLYAROV i won't even stop
Verona NJ
Andrey Stolyarov (b. 1990) is a composer, conductor, and singer, currently beginning his Doctor of Musical Arts degree in Composition at The Hartt School in West Hartford, CT. Andrey’s recent achievements in composition include a residency at the Unitarian Society of Hartford and multiple national and international premieres. His piece Ebb & Flow won first prize at the 2014 ISAM Festival Joseph Dorfman International Composition Competition in Ochsenhausen, Germany. Additionally, Andrey was a finalist in the 2014 ASCAP Morton Gould competition and the Khorikos ensemble’s ORTUS competition. Andrey is currently the Director of Music at West Avon Congregational Church in Avon, CT, and is a graduate music theory teaching fellow at The Hartt School. He is an active professional choral singer in the Hartford and New Haven areas, currently performing with the CONCORA ensemble based out of New Britain, CT. www.andreystolyarov.com