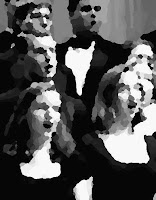 The American Prize winner:
Schola Cincinnati
Jason Harris
Cincinnati OH
Formed in 2017, Schola Cincinnati is a professional vocal ensemble dedicated to providing the greater Cincinnati area with passionate high quality performances of sacred and secular choral repertoire spanning the entirety of the Renaissance. The local musicians who comprise our ensemble envision our role as that of curator: the venue is our museum, the program our exhibition, and the composers the artists. We are charged with presenting these works of art in the most flattering light possible and allow our audiences to be transported to the timeless and unique soundscape of fourteenth-, fifteenth-, and sixteenth-century western art music. It is our goal to not only entertain our audiences, but to educate through pre-concert lectures, school outreach programs, and by strengthening ties with other Cincinnati area arts organizations through frequent collaborations and exchanges. Visit us at www.scholacincinnati.org.

The American Prize winner:
University of Denver Lamont Chorale
Catherine Sailer
Denver CO
The University of Denver Lamont Chorale is the premier choir at the University of Denver, and includes music majors and non-music majors from across the school.  The choir passionately pursues artistic excellence in choral performance and sings diverse repertoire.  Through the Chorale's dedication to performing music of living composers, it has enjoyed collaborations with Tan Dun, Morten Lauridsen, Eric Whitacre, Tim Takach, Ken Lampl,  and many more established and emerging composers and conductors.  The Lamont Chorale has performed for the Colorado Music Educator's Association Conference, and the Regional conference of the American Choral Director's Association.


2nd Place:
Portland State Chamber Choir
Ethan Sperry
Portland OR
Hailed by Fanfare Magazine as "one of the most interesting choral groups in the United States," The Portland State Chamber Choir has performed at many prestigious venues, touring internationally and making multiple appearances at ACDA and NAfME Conferences. In 2013 the Chamber Choir competed at the Seghizzi International Competition for Choral Singing in Gorizia, Italy where they earned 15 separate awards and became the first American Choir ever to win the Grand Prize in the competition’s 55-year history. The Chamber Choir has recorded on the Albany Label and Hildegard Labels and their latest CD, "Into Unknown Worlds" was a finalist for the 2015 American Prize and the 2015 CARA Award for Best Classical Album and is the only student album ever to earn a place on Stereophile Magazine’s list of “Recordings to Die For.” They are very excited to be making their first tour to Asia this Summer!


3rd Place (there was a tie):
BJU Choirs & Symphony with Rivertree Singers
Warren Cook & Michael W. Moore, conductors
Darren P. Lawson
Greenville SC
BJU’s choral program seeks to strengthen each participant’s technical and artistic potential within a developmental program that strives for the highest level of musical excellence for the glory of God. All students are welcome to audition and are placed according to their classification and ability. Singers are re-auditioned every year to determine their next placement in a system of six graded choirs. University Singers is an all-freshmen choir of nearly 100 voices, who recently made their Carnegie Hall debut under Eliezer Yanson Jr. Collegiate Choir is an all-sophomore choir; Lyric Choir is all women, and Concert Choir is upperclassmen. The top-tiered Chorale and Chamber Singers memberships consist of upperclassmen and graduate students. Follow the BJU choral program at www.facebook.com/bjuchoralarts.


3rd Place (there was a tie):
BucsWorth Men's Choir
Alan Stevens
Johnson City TN
BucsWorth Men’s Choir was formed in the early 1990s at East Tennessee State University as a primarily a cappella ensemble called “10 BucsWorth” – which referred to the number of guys in the ensemble and a play-on-words reference to the ETSU mascot, the Buccaneers. In 2013, the ensemble was expanded to a full men’s choir. BucsWorth is composed of men from all majors, and the choir performs a mix of traditional and contemporary music. BucsWorth annually hosts "Men in Song," a choral festival that draws over 200 men from the region to sing together and promote choral music. In 2016 BucsWorth performed at the Intercollegiate Men’s Choruses National Seminar on the University of Illinois campus. In 2014 BucsWorth was the featured ensemble at the “Young Men’s Power Sing” in Atlanta, hosted by the Atlanta Youth Singers and the Atlanta International School. You can find more information about BucsWorth Men’s Choir on their Facebook page: www.Facebook.com/BucsWorth
The American Prize in Choral Performance, 2017-18—community division

The American Prize winner:
University Musical Society Choral Union
Scott Hanoian
Ann Arbor MI
The 175-voice UMS Choral Union is known for its definitive performances of large-scale works for chorus and orchestra. Formed by a group of local university and townspeople who gathered together for the study of Handel’s Messiah in 1879, the UMS Choral Union has performed with many of the world’s distinguished orchestras and conductors in its 137-year history, including the Detroit Symphony Orchestra, San Francisco Symphony, Budapest Festival Orchestra, and the Mariinsky Orchestra. Notably, in 2006, the UMS Choral Union won three Grammy Awards for their Naxos recording of William Bolcom’s Songs of Innocence and of Experience (“Best Choral Performance,” “Best Contemporary Classical Composition,” and “Best Classical Album”). The UMS Choral Union is led by music director and conductor Scott Hanoian. For more information visit ums.org/choralunion.


2nd Place and Special Judges' Citation: "Quality, and Joyful Music-Making in Abundance"
VOX Femina Los Angeles
Karen Hart
Los Angeles CA
Founded in January 1997, VOX Femina Los Angeles gives women voice through the performance of quality choral literature. Diverse in culture, age, race, belief, and sexual identity, we are dedicated to commissioning new works and raising awareness about issues that affect us as a family of women. Through our music, we seek to create a world which affirms the worth and dignity of every person. Since our debut in April 1997, VOX has performed a catalogue of music exemplifying diverse musical styles and repertoire. In keeping with our mission, VOX has commissioned over 40 new works for women’s voices, and collaborated with over 35 contemporary composers. In addition to our season schedule, VOX has been active in community outreach, performing and participating in over 200 community events and collaborating with other arts organizations such as the LA Philharmonic, LA Master Chorale, Gay Men’s Chorus of Los Angeles, CONTRA –TIEMPO, and the Los Angeles Women’s Shakespeare Company. VOX has released three recordings: “Taking Shape” (1999) and “Still I Rise,” (2002) are collections of live performances. Our studio CD entitled “Simply… VOX Femina Los Angeles” (2006) was awarded Best Recording by a Choir by OutMusic.

The American Prize in Choral Performance, 2017-18—school and youth division

The American Prize winner:
Arvada West HS Vocal Showcase
Chris Maunu
Arvada CO
Since Chris Maunu took over Arvada West choirs in 2006, the department has grown from 120 to over 340 students. Under Maunu’s tutelage, the program has become one of the nation’s premier choral programs. AWHS’s mixed chorus, Vocal Showcase, performed at the 2017 National ACDA Conference in Minneapolis. He has also had choirs perform at Colorado CMEA conferences seven times since 2009. The ensembles consistently receive superior ratings and 1st place finishes at festivals and contests. Arvada West choirs have performed at Carnegie Hall, the Kennedy Center, and High Mass at St. Peter’s Basilica in Rome and St. Mark’s Basilica in Venice. Mr. Maunu is a national quarterfinalist for the 2018 Grammy Music Educator Award. Away from AWHS, he is co-founder/director of the new 16-voice professional choir, Anima Chamber Ensemble. Chris currently serves as the Men’s Choir Repertoire and Resources Chair for Colorado ACDA and on the CMEA Vocal Council.


2nd Place:
Indian Springs School Concert Choir
Andrew Dibble
Pelham AL
Hailed as "the school's symbol of excellence," the Indian Springs School Concert Choir and smaller Chamber Choir perform across the country and around the world, delighting audiences of all ages and diverse backgrounds in cathedrals, universities, and arts centers from San Antonio, Chicago, and New York City to Beijing, Dijon, and Vienna, where they have performed with the Vienna Boys Choir.

The New York Times described the choir’s Lincoln Center debut as "a superb projection that would have done credit to any professional chorus." The choirs continue to garner critical praise for their sensitivity and "exciting, vibrant" singing. “The choir is disciplined, focused, and maturely expressive in a manner way beyond their young age,” says William Trafka, Music Director of St. Bartholomew’s Church in New York.


3rd Place (there was a tie):
The HS for the Performing and Visual Arts Madrigal Singers
Shannon K. Carter
Houston TX
The High School for the Performing and Visual Arts was established in 1971 and represented the first attempt by any national public high school to correlate academics and concentrated arts training.  The Madrigal Singers is one of three auditioned small ensembles for junior and senior vocal majors.  They are extremely active in the Houston Arts community.  In addition to performances on HSPVA fall, winter, and spring concerts, the ensemble performs throughout central Houston at holiday parties and community and corporate events.  In 2016, the ensemble won the American Classics Madrigal and Chamber Choir Festival and were also named the Mark of Excellence National Choral Honors National Winner. For more information on the HSPVA Vocal Department, visit www.hspvavocalmusic.com


3rd Place (there was a tie):
Brearley B-Naturals
Karyn Joaquino
New York NY
The B-Naturals are the Upper School a cappella group of The Brearley School. The group was founded by students in 1986, and has performed under the direction of Karyn Joaquino since she joined the Brearley faculty in 2000.

The repertoire is intentionally broad, ranging from traditional choral pieces to vocal jazz and pop. Much of the repertoire is arranged by Ms. Joaquino, but every show or recording is likely to include student arrangements, and even original student compositions. Most members of the B-Naturals pursue their love of a cappella music during their college careers as well, often directing their own groups.

The B-Naturals have sung the national anthem before a Yankees game, entertained the King and Queen of Sweden, toured England and Wales, and performed twice at Jazz at Lincoln Center. In addition to live performances, the B-Naturals have recorded seven CDs, and have been recognized for their work by DownBeat Magazine, Best of High School A Cappella, and the Contemporary A Cappella Recording Awards (CARAs). In 2013 and 2015 the group won Third Place in The American Prize for Choral Performance, Youth/High School, a national recording competition.

The Olympia High School Concert Choir is a mixed chorus of 62 students which draws from a school of about 530 students. The chorus is a non-auditioned group of dedicated musicians who hail from approximately eight small rural communities which comprise the Olympia Community School District #16 in Stanford, Illinois- www.olympiacusd16. This chorus is a curricular, elective class which meets every other day.  This is the only chorus at the high school and it is comprised of all four grade levels plus special needs students.  The Olympia Chorus has been a finalist in the American Prize competition, has sung in St. John the Divine Cathedral in New York City, and performed in the famed Casa Loma of Toronto, ON. This group consistently receives Superior ratings in the Illinois High School Association Organizational Competition.  The group is under the direction of Debbie Aurelius-Muir.