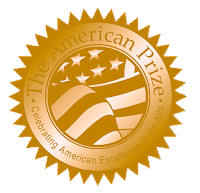 The First Place orchestras in each division for the 2017-18 contest year are:

Photos and short biographies of each of these orchestras, as well as those of the runners-up in each division may be found here: http://theamericanprize.blogspot.com/2018/07/winning-ensembles-orchestras-2017-18.html

A larger list of orchestras, advanced to the finals earlier this season, may be found here: http://theamericanprize.blogspot.com/2018/05/finalist-orchestras-2017-18.html

The first place (winning) orchestra in each division receives a cash award up to $500, depending on the year, the division and the number of applicants. All orchestras receive certificates, written professional adjudication, and regional, national and international recognition based on recorded performances. There is no live competition. In addition to written evaluations from judges, winners are profiled on The American Prize websites, where links will lead to video and audio excerpts of artist performances. The American Prize has awarded more than $50,000 in prizes in all divisions since 2009 and is presented annually in many areas of the performing arts.