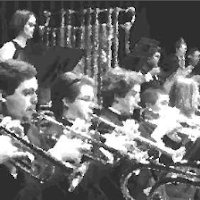 The American Prize winner:
Richard Tad Greig
Westminster College Wind Ensemble
New Wilmington PA
The Wind Ensemble is selected through audition and rehearses three times per week for one hour.  The Wind Ensemble performs a wide variety of the most challenging established and new works. This ensemble has received numerous commendations, most notably three guest appearances at the Pennsylvania Music Educators Association All-State Conference over the past decade.  The conclusion of these performances was met with immediate standing ovations.  They have also received favorable mention in both recent NASM (National Association of Schools of Music) reviews. The Wind Ensemble also shared international performance tours with the Concert Choir to Spain and Scotland.  Along with their concert performances, the ensemble has accompanied numerous student and faculty soloists and guest artists. The ensemble has also had the privilege of working with notable composer/conductors including: Mark Camphouse, Dennis Fisher, Brian Balmages and Andrew Boysen Jr., to name only a few.  The Wind Ensemble has premiered numerous works and regularly records for area composers, providing recordings to submit to various publishing houses.

The Legacy High School Wind Ensemble is under the direction of Dr. Curtis Melton, and is the most advanced concert band at Legacy High School in North Las Vegas, NV.  The Legacy Band Program was "re-born" in the fall of 2013 after not having a band program at the school for many years.  Since then, the band program has nearly tripled in membership for the upcoming fall of 2017.  The Legacy HS Wind Ensemble has received consistent "Superior" Ratings at festivals/contests since 2013-14.  The band has performed at special engagements throughout Las Vegas, performing for the Mayor, and the grand opening of the Las Vegas IKEA. The marching band also has performed in Los Angeles in the Canoga Park Memorial Day Parade in 2016 and 2017.  The Legacy HS Band Program offers marching band, three concert bands, a jazz ensemble, a colorguard/winterguard program, and an AP Music Theory class.